Threshold Climbing is owned by two Oklahoma natives, John and Sierra Tarkington. They have been climbing for 15 years. After seeing a need for a climbing gym in the community, somewhere to practice during the week before taking a weekend trip to rock climb outdoors, they decided to fill that gap themselves. In 2017, Threshold opened their doors. It was a labor of love; every detail was well thought out and painstakingly planned.

John knew he wanted to open a climbing facility, but he also knew he could not go into it unprepared. He had a passion for climbing, but he needed to develop his own business acumen to ensure their facility was a success. He attended the University of Oklahoma and studied entrepreneurship, Sierra would go on to study business at the University of Central Oklahoma, and together they learned everything they needed to know about starting and owning their own facility. After 8 years of careful planning and learning, John and Sierra opened Threshold.

When Threshold opened, the Tarkington’s had a strong community of climbers ready to support them and enjoy the gym, but one outcome they were not expecting is the impact they would have on so many lives. When John talks about the impact that Threshold Climbing is having, he says that it is “very rewarding” to have a large hand in introducing people to, and educating them on, rock climbing. Threshold has several clients who have sought out training as an outlet for transitioning from military to civilian life or as a means for overcoming alcoholism, depression, and other hard life journeys. John also says that Threshold Climbing is responsible for “I don’t even know how many marriages.”

John and Sierra are proud of how they run their gym. They have had clients from all over the country visit Threshold and all are impressed by the facility. John attributes their success to reinvesting heavily into their business, and always being open-minded to change. Threshold Climbing is constantly evolving things based on what works best and what the customer wants. They place a significant emphasis on route-setting their rock-climbing walls. John said they reroute, or change up the climbing paths, three times a week. Climbers get a new experience, a new challenge, every time they come in.

The resources dedicated to routing the rock-climbing walls are significant, but the investment is worth it.  This process is what makes the experience at Threshold Climbing accessible to all. The routes dictate how challenging a climb can be, but they also impact who can climb. Threshold creates routes specifically geared toward younger climbers. To introduce as many people to the sport as early in their lives as possible, John and Sierra realized that one of the barriers to youth climbing was that routes were set for adults. This meant that the holds, or the colored knobs that climbers hold onto, are typically too far apart for kids to effectively climb on. This is just one of the ways John and Sierra are making climbing more accessible to everyone.

The Tarkingtons have also dedicated time to making their gym accessible to climbers with disabilities. They have attended and invested in the Adaptive Climbing Initiative, a two-day training where “certified and experienced facilitators explain the specifics for creating an adaptive climbing program while developing safe, inclusive, and supportive communities for adaptive athletes.” The program is hosted by Paradox Sports and sponsored by The North Face.

John said “Sierra and I have always been very very lucky, and in the grand scheme of things we have no right to wake up and complain about anything. We’re always trying to find ways to give back to the communities. You’ve gotta be completely heartless to walk into NewView and not feel something.” The first time they hosted us for our OWL Camp, they introduced us to a climber who is blind, Justin Salas, a gold medalist from Tulsa Oklahoma. For NewView’s campers, seeing someone like them doing incredible things is a huge confidence boost and empowering beyond words. Justin Salas and his climbing partner Matthew Frederick will both be present at camp again this year, thanks to the generosity of Mathis Brothers Furniture who is funding their trip from Vegas to Oklahoma to be present for this experience.  Thanks to this kindness, this year’s camp will be offering a new group of kids living with blindness the chance to be inspired to try new things and to push themselves to new limits.

Justin Salas was diagnosed with “optic neuropathy of unknown origin” at 14 years old. “Life without vision has not slowed down this blind ascensionist—Justin is a Midwest rock climber from Oklahoma who specializes in bouldering. When J, as his friends call him, is not climbing you will find him with a camera in his hand, capturing the world through a new perspective.” Justin has earned 2 consecutive gold medals in the USA Climbing Adaptive National championships, and a silver medal in his first International Federation of Sport Climbing Paraclimbing World Cup in Scotland in 2017.

NewView focuses on empowerment and independence, especially through our pediatric programs, and is ecstatic for the opportunity to partner with an incredible community resource. For over 70 years they have provided programs centered around empowering individuals who are blind or have low vision, maximizing their opportunities for independence through all stages of life. 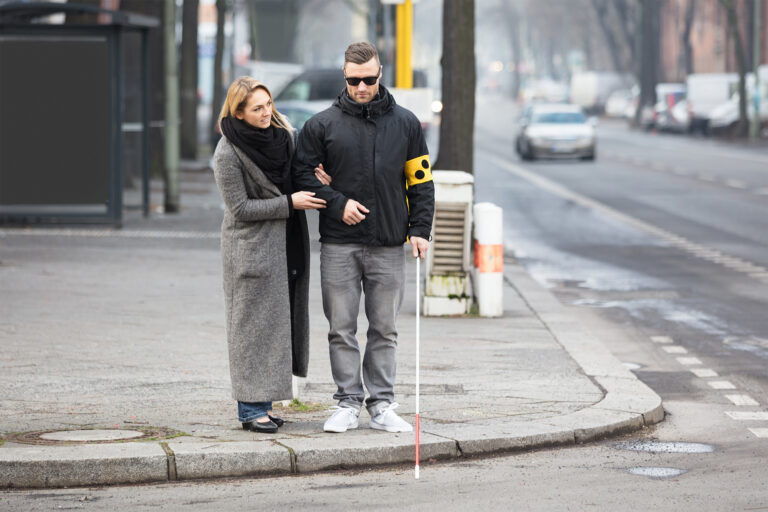